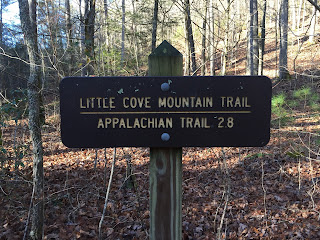 Earlier this week was a spectacular January day, and I celebrated by getting out on the trail.  I ended up on the Little Cove Mountain Trail, which is located between the Peaks of Otter resort on the Blue Ridge Parkway and Interstate 81, south of Natural Bridge.

It is the 4th time I've been down hiking in this area, dating back to 2012 when I first hiked here as part of my quest to complete the entire A.T. in Virginia (link). I come back even though it is a 90 minute drive to the trailhead and there are lots of closer trails.

There are several good trails here, but I was always curious about the area because I have a 1974 edition guide to the A.T. that describes the AT back then coming out of the mountains at the bridge which is the northern end of the Little Cove Mountain Trail. (And this explains why there is such a great bridge for an otherwise minor trail.)

I've always been curious to find the old A.T. route. And I thought I had but a friend who really knows these woods told me that I hadn't gotten it right after the 3rd time here. The USGS topo confirmed that the trail I used on Trip 3 was not the A.T., as the topo still shows the older route of the A.T.

In 1974, A.T. hikers heading southbound crossed the bridge and then passed the Cove Creek Lean-to (sited way too close to the road!). This shelter is now long gone, and a campsite exists in its place.

According to the old guidebook's southbound directions, 1974 hikers then "Turn right. (Ahead is trail to Little Cove Mtn.) Ascend steeply for 0.4 m. on wide trail up east slope of Cove Mtn. toward ridge crest." 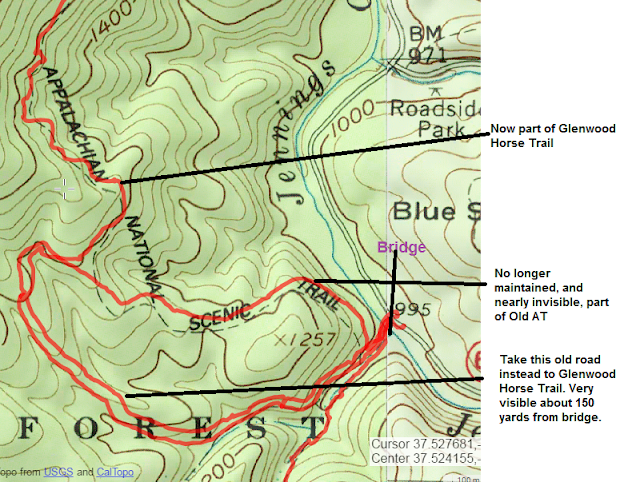 I finally found the old A.T. this week and I hiked it after completing a variation of the longer loop linked above. As shown by the GPS tracks on the attached map, I got most of the old trail. I didn't get all of it, as I clearly went off trail when I got near the present Glenwood Horse Trail. It is basically invisible from the Little Cove Mountain Trail today, and hiking it is essentially a bushwhack. Below is the view from the Little Cove Mountain Trail, and the old A.T. is in this photo.  Try to find it before scrolling down and viewing the same photo with the trail marked.

The old trail meets the present Glenwood Horse Trail at a point where the old woods road turns into a trail.  The photo below shows a grassy area that probably used to be a turnaround, and a much thinner trail to the back, marked with orange blazes for the horse trail. I missed this connection (and did not confirm that until I returned and overlaid my route on the USGS topo map), as I instead reached the present horse trail on an old road.  But I probably only missed about 200 yards of trail.


From this point, the Glenwood Horse Trail uses the old A.T. until it intersects with the present A.T. You can see from the photo below that this is definitely a trail, and you will see an old white A.T. blaze if you look carefully at the tree in the photo. The blaze has been painted black, so it is not obvious.  Likely other white blazes have been painted over with the present trail's orange blazing.

I wish these old sections of the A.T. were maintained when on public lands, but understand the fiscal constraints the Forest Service and Park Service operate under these days.  So for now, whenever I can find them, I'll be bushwhacking the old trails and imagining what it was like to hike the A.T., circa 1974.