Update: After writing this comparison, I found an updated version of the Trails Illustrated Shenandoah National Park Map.  Below I have edited the bullet points to indicate the areas where the map has improved since the version I originally reviewed.  I give National Geographic credit - they had found and corrected many of the errors I noted in my original review.

I occasionally come across people online asking whether to purchase trail maps for Shenandoah National Park from National Geographic/Trails Illustrated or from the Potomac Appalachian Trail Club. I own both sets on my iPad (and PATC in print), and thought it might be helpful to offer some detail on each.

As an up-front disclaimer, know that I am a member of the PATC's Map Committee, and am very involved in advising on map revisions.  The Maps Committee presented me with the PATC's Hawksbill Award in 2014 for my volunteer work over the past year to their map updates (Link). Given this information, you may interpret my clear preference for the PATC maps and my comments below as bias. But I hope that National Geographic reads my list of their map's shortcomings and corrects every one of them.

My review of the National Geographic` Shenandoah map comes from an app they sell that I have loaded on my iPhone and iPad. It is really a spectacular deal - $4.99, not just for Shenandoah, but for 15 National Park maps. (Link.) I recommend it highly - if it still exists. For $4.99, you get the right to download HD versions of Trails Illustrated maps for many of the most popular national parks. If your phone or tablet has the storage space, download all of them and never be bored on the bus or in line for lunch again.  I wish they had the same product for the other Virginia trail maps they produce. (It does not appear to be available for the Android and may no longer be available in any version.)

The PATC also offers apps with their maps. The Shenandoah app is available in Android and iPhone versions and costs $3.99 for the iPhone version. (Link.) Though this app is less expensive than the NG app, it only covers Shenandoah National Park. As of the writing of this post, the app also does not contain the current print versions of the maps - the app has not been updated since 2012.

In print, my overwhelming preference is for the PATC maps. This isn't just because I submit updated data for revisions. Here are some of the biggest reasons: 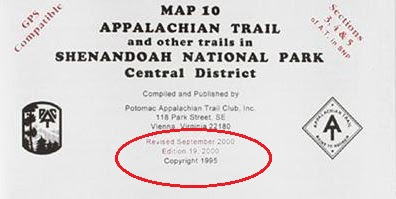 
South District
Conclusion: Although NG maps have improved substantially with the 2015 edition of their Shenandoah map, overall I believe the attention to detail is why the PATC maps remain superior.

Additional Disclaimer: I purchased both sets of maps with my own money and do not receive free maps as a member of the PATC Maps Committee.