What is Shenandoah's Steepest Trail?

A couple of Springs ago I hiked the Doubletop Mountain Trail with several other hikers.  This trail is in the Rivanna Wildlife Management Area just east of SNP's Central District and has some sections that are insanely steep.  Climbing the first of Doubletop's peaks requires ascending a grade of 37% for 2/10ths of a mile.  And the second peak is even steeper, with a 51% grade!  But this is only a couple of hundred feet long. (Of course, at 51%, even this short distance is a grind...)  In between deep breaths from the climb, I asked others if they knew of any steeper trails in Shenandoah, and was told that the Leading Ridge Trail is the steepest climb in the park.  Onto the "bucket list" went the Leading Ridge Trail. 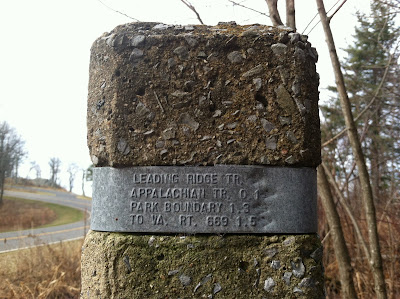 After dropping off a family member at Dulles last month I had a few extra hours driving back to Charlottesville, and decided to finally check out the Leading Ridge Trail.  It descends the western slopes of Shenandoah National Park, and is near the northern end of Shenandoah's Central District.  So it is south of the Skyline Drive tunnel and Mary's Rock, but north of Hawksbill and the Pinnacle Picnic Grounds.  I parked at the Jewell Hollow parking area and headed north on the Appalachian Trail to check it out.  I had done this section of the A.T. a couple of years back with the PATC's Charlottesville Group.  Link.

From the parking lot, a short connector trail takes you to the A.T., then you head north 0.3 miles to the post announcing the Leading Ridge Trail.  From there, the Leading Ridge Trail climbs, sometimes steeply, for 0.2 mile to the highest point on the hike, which my GPS measured at 3509 feet.  Over the next mile, the trail dropped to 1861 feet in elevation, a drop of 1648 feet over almost exactly one mile.  This calculates to an average grade of 31%.

That number probably doesn't mean a lot unless you can put it into perspective.  Climbing Mary's Rock from Panorama (U.S. 211), for example, is 1.8 miles and ascends 1028 feet, at a grade of about 12%.  So the Leading Ridge Trail is over 2 1/2 times as steep as the popular Mary's Rock climb.

Where the Leading Ridge Trail meets the western boundary of Shenandoah National Park is a concrete trail post, but there is no sign telling you to turn around due to private property.  The PATC Map for this area states that there is "no public access."  The Trails Illustrated map has the trail ending at the park boundaries.  The concrete post at the trails start on the Skyline Drive (posted above) lists the distance to Virginia Route 669, which would indicate that it is OK to hike to the road.  After looking around and seeing several hunting blinds, however, I decided not to test the limits of the trail.