The Rivanna Trail loops Charlottesville and is around 20 miles in length.  It does not have a great amount of elevation change, at least relative to trails in the Blue Ridge and Alleghenies to the west.

I have hiked nearly all of the trail in sections, but never done the entire thing in one day.  Hiking the entire trail is actually pretty tough to do, at least legally, because there are three railroad crossings that are considered trespasses.  In addition, sewer expansion in several areas of the city and surrounding county have decimated former sections of the trail, and most of these sections have only recently been reconstructed.    And it seems that the trail's route is constantly changing as the foundation that maintains the trail negotiates better routes, and landowners on other sections revoke access to their property.  (The most famous example was a woman who incredibly strung razor wire across the trail to keep people off her property, which caused the City of Charlottesville to take her to court. We avoided the trail here, but reportedly the razor wire still exists.) 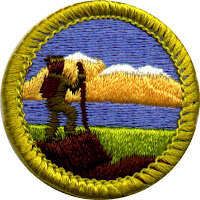 So why do the trail now, in early October, when there are so many seemingly better trails to explore?  I am a merit badge counselor for Hiking Merit Badge.  Several of the scouts in my son's troop need a 20 mile hike in order to earn the badge.  Hiking 20 miles with boys aged 11 through 15 is no easy feat (no pun intended), so completing the hike near the scouts' homes seemed like a good plan.

The scouts met up at 8 AM on Saturday, October 6th next to one of the railroad crossings - on Old Ivy Road over near the back side of the UVA Baseball Stadium and the University Village Retirement Home. Meeting here meant that we could end the hike only a few feet away, on U.S. 250 west of the UVA campus, and not have to cross the railroad tracks (involving either a trespass or a long detour).  I had developed work-arounds for the other railroad crossings, as described below.

We started off just after 8:15, heading north on the trail.  Our hike initially took us past the Leonard Sandridge Drive, which is the newest road in Charlottesville and connects the U.S. 29 Bypass and UVA's new basketball arena.  Then we threaded past the Business School, Law School, and JAG School along a route that passed some very old building foundations and over a brand new wooden bridge built for the Rivanna Trail.  It is the first ever bridge I have seen with an integrated flower pot and even had a watering can attached to the bridge.  Nice job!  (It turns out that this bridge was built by a group from a nearby all-girls school, as profiled here.  They deserve to put a plaque on this work of art taking credit for their achievement!)

After about 1.8 miles, we crossed Barracks Road and headed up a back street.  The trail was not very well marked here, and it was fortunate that I was familiar with its path.  You have to really have a sharp eye to see the trail marker on a light pole down the street, then find another trail marker attached to a picnic table next to a business complex's parking lot.  This took us behind the Federal Executive Institute, which is some kind of training facility for federal workers.  The signs told us to stay on the trail, which quickly took us back through the cyclone fence and onto another street.  We crossed U.S. 29 at a traffic light with a pedestrian signal, and then passed the Bodo's Bagels Restaurant.  We didn't stop here, but I eat at this place at least three times every week.  Inexpensive and highly recommended.  But if you are from Charlottesville, you already know this.

We were back on trails again after passing the English Inn, and were soon passing under the U.S. 250 bypass on concrete blocks in a culvert.  This is always a big adventure spot for a group of boys!

We then climbed up the embankment to a sidewalk, crossed the creek on a pedestrian bridge, dropped back down steeply on the other side of the creek, then went through another culvert under Hydraulic Road. People who live in Charlottesville tell me they have no idea that the Rivanna Trail crosses these two busy streets in this area; it is hidden in the open here.

At Hydraulic Road we stopped briefly to pick up two additional scouts and a dad, then continued north on the trail.  The trail here was a little confusing in sections, because it had been recently rerouted, though a tricky stream crossing I remember from past hikes was still there.  The sewer reconstruction closed the trail completely 4.0 miles into our hike, just as the trail crossed Brandywine Drive.  We had anticipated this because of an alert on the Rivanna Trails Foundation (RTF) website, and took neighborhood streets back to the bypass so we could take a side trail through McIntire Municipal Park to meet up with our first mom next to the baseball field at Charlottesville High School, at 5.1 miles.  Here, the boys refilled water bottles and devoured homemade chocolate chip cookies for 15 minutes.

After that, we walked down Melborne Street to rejoin the trail at Park Avenue.  The sewer project had been completed up here, and the trail followed the denuded path of the sewer pipe until after we crossed Holmes Avenue.   The trail weaved through woods behind several neighborhoods until it dumped us onto Locust Avenue so we could avoid the razor wire.  We lost two boys and a parent, who had sporting obligations that afternoon.  After passing that neighborhood, we were back on the trail and strolling along side the trail's namesake Rivanna River.  The trail here actually becomes paved and is much more crowded relative to other parts of the loop.  At the 10.6 mile mark, roughly halfway through our hike, we met Mom Number 2 and ate lunch at Riverview Park from 12:45 to 1:15, taking off again after the requisite group photo.  We lost an adult leader here.

The only way to continue on the Rivanna Trail at this point is to trespass over a railroad bridge - something we weren't going to do with a bunch of boy scouts!  So we walked city streets for the next 1.7 miles, going past the region's sewage treatment facility, a large mobile home park, and the local stockyards.

We were back on the trail at 2:00, 12.3 miles into the hike, and would closely follow the western progression of Interstate 64 for the next several miles, until we reached Azalea Park at 3:30, 16 miles into the hike.  Here we met another mom, lost a boy due to foot problems, and gained another boy and a dog.  We skipped a small section of the Rivanna Trail during this part of the hike, choosing to walk the sidewalk of 5th Street rather than taking the trail behind Hardee's.  They both end up at the same place, but we wanted to get to Azalea Park sooner, for the sake of the hurting scout.

Another break at Azalea meant that we would not reach Fontaine Avenue until 5:02, an hour-and-a-half after reaching Azalea Park 2.6 miles earlier.  But this was a particularly enjoyable section of trail for me, as it involved a new section of trail that had recently replaced a series of street connections.  Unfortunately, another section just before that had formerly been part of the Rivanna Trail, but we had to detour because the landowner had revoked permission to cross his land.

At Fontaine we took our last snack break, a full 18.6 miles into the hike.  The final 1.8 miles was through the UVA-owned O-Hill section, scene of many trail runners and mountain bikers.  Some of the boys were really dragging here, while others broke into a run in order to get their ordeal over sooner. 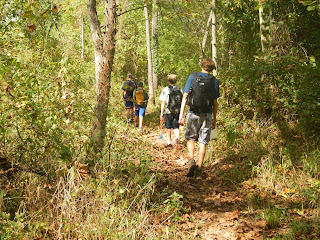 The GPS read 21.7 miles at the end, though the data in the computer indicates it was only 20.4 miles.  Since we had to do 20, it was good to do some extra miles along the way.  The entire hike took the group approximately 9 hours and 45 minutes (some finished sooner, and some took a little longer).  The boys seemed very pleased to have completed the hardest requirement of their Hiking Merit Badge - the 20 mile hike.  Realistically, though, the hardest thing may be to get them to sit down and write the required trip report! 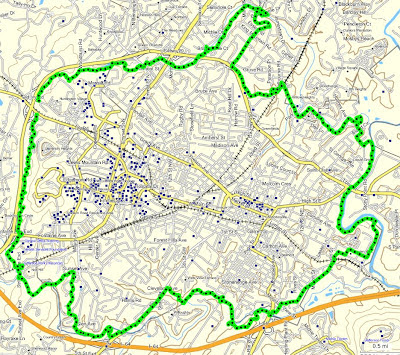 I did receive one report very quickly.  Here is another perspective on the hike:


On October 6th I hiked twenty-one and a half miles on the Rivanna trail. It was partly cloudy most of the trip and a mild temperature. The trail surrounds Charlottesville but we had to take some roads as detours and to complete the 20 miles. There were about 8 scouts on the hike and we gained and lost some people because of sore feet and soccer games. I packed lots of water and a lunch. I also had snacks along the way. Because of the trail being in the city, I didn’t see that much wildlife besides a couple squirrels. It was pretty smooth most of the way but in some places it was rocky and steep. It was even sandy in some places.

The next day my feet and legs were sore. It was a very long hike and I’ve never hiked that far before. I saw a great view from the Quarry Park section and I passed many places that I’ve been to before. Although it was very tiring, I wish I could do it again.