It is always a good thing to go out on September 11th and hike.  I took a day this year to do just that. The infamous September 11th was a day like this one - crisp and cool, with views that go on forever.  The flag at the Shenandoah National Park entrance station on U.S. 200 was at half mast.  It was cool this day after seemingly solid months of hot, hazy, humid weather. 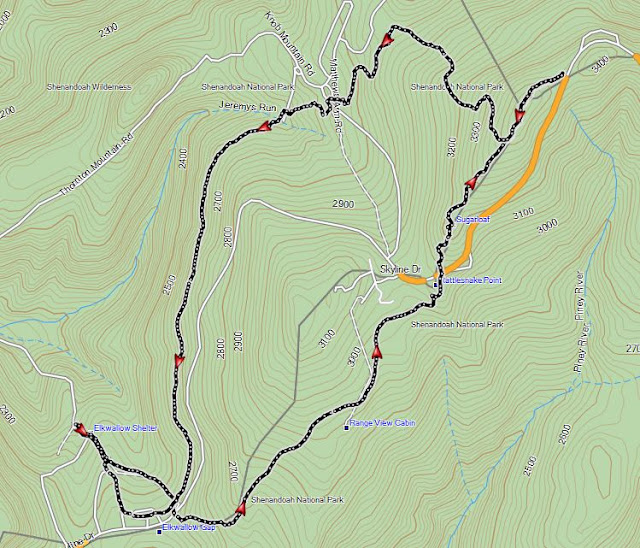 I was in the Northern District of Shenandoah National Park to hike another section of the Appalachian Trail as I slowly finish the trail through Shenandoah National Park.  I have said before that I find the A.T. very boring through SNP, as it seldom hits the highlights of the park and often winds through the park within about 300 yards of the Skyline Drive.  Others disagree - but really, I'd much rather be hiking the Staunton River Trail or Rocky Mountain Run Trail, or any of about 50 other trails, than the A.T. here.

I have a goal to day hike the entire AT in SNP, and then maybe to complete every mile of trail in each of SNP's three sections.  I finished the Southern District over a decade ago before disinterest set in.  I've been back over the past year to finish it up.  It was easier back in the day, as I didn't have a dog and I could stash a bike at one end of my hike to ride back to my car.  Now I walk the dog both ways.

This was the final section of the A.T. in the Northern District, so I only have a few small sections in the Central District to finish up.  I had forgotten that I hiked to Elkwallow from the south earlier this year, but remembered when I drove into the parking lot.  But I still missed the turn for the northbound A.T., and ended up hiking an extra half mile thinking I was still on a side trail heading towards the A.T.  Not real well blazed in that part of trail!

Heading north took me across the Skyline Drive and past signs to the Range View Cabin.  Never stayed there, but know that the PATC guide states that it can be very cold in the winter.  After a little bit of a climb, the dog and I crossed the Skyline Drive again and continued climbing.  I passed a marker indicating the start of a side trail the, the start of the 252 mile Tuscorora Trail, which rejoins the A.T. just north of Harrisburg, Pennsylvania.  (Want a really large loop hike?  Here it is!)  At the top of the mountain is the one great view of the hike, from some rocks just west of the A.T.

At the 3rd intersection with the Skyline Drive (Hogback Overlook) I turned around, as I had done the rest of the A.T. last December.  But I turned off onto the Tuscorora Trail to make a loop hike and check a couple of new trails off my list. From there, I proceeded to the Traces Trail, which is a trail that circumnavigates the Matthew's Arm Campground. Coming out of the woods at the campground host station (i.e. tollbooth), we crossed the road and found the Elkwallow Trail, which crossed Jeremy's Run on a boardwalk, then took us back to our starting point in a direct fashion.

Because I had not been able to exercise since Harper's Ferry in August, this was a good length hike for me.  I look forward to returning to the area this weekend, when I am camped at the Matthew's Arm Campground for some training.