For the past few months I have been hiking in a pair of pretty strange looking boots made by a manufacturer in France in a model that doesn't appear to be sold currently in the U.S. 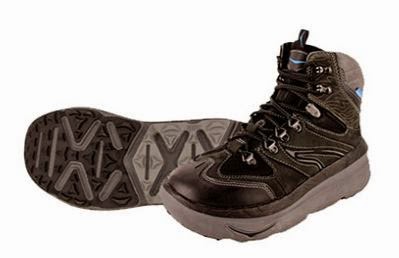 I began wearing these boots after nearly a year of pain in my right foot, which I diagnosed as metatarsalgia.  Previously, I had purchased an expensive pair of Solomon hiking boots,

but they didn't do the job.  I probably should have returned these to REI and tried out their unconditional guarantee, but I never felt right doing that after hiking many miles in them.

Before that, I had been wearing some Keen Targhees while training for and eventually scaling Half Dome in Yosemite National Park, but I think they might have been the cause of my foot problems.

The Hokas I now wear came from an online outlet called The Clymb, which sales various outdoor gear for a very short time (like two days) at a drastically reduced price.  The thick soles and light weight of these boots appealed to me, as I figured a soft sole might help me where the more rigid Solomons could not.   (I have also found them online from an outdooors store in Boulder, Colorado.)

These Hoka One Ones make me look like I am a short man trying to look taller.  But they are very lightweight and the thick sole absorbs shocks and cushions the feet.  And the major reason for recommending them is that my metatarsalis has gone away since I started hiking in these shoes.  It will be interesting to see how long they last, given the soft sole.  I have purchased 3 pairs, so I am hoping they will last me a couple of years.  And I seldom wear them except when hiking.  That thick sole takes some getting used to when hitting the accelerator pedal on the car's floor, however.

So, yeah, they look kind of ridiculous on me.  But I'll take the tradeoff if my feet feel better!