The Wild Oak Trail is a loop trail in the George Washington National Forest west of Churchville and Staunton.  The trail received a National Recreation Trail designation in 1979.  The present trail is a series of older trails cobbled together.  The trails date back to the 1930s, when the Civilian Conservation Corps built portions for forest fire control purposes. I have hiked much of it in the past - as part of six different day hikes - though I had never hiked the entire loop.  Because the loop is listed as being 25.6 miles long, it has always been a goal to do the entire loop in one day.

My friend Marit suggested we go for a hike as she prepares to hike the entire Pacific Crest Trail this Spring. I have hiked often with Marit in the past, and she is the toughest hiker I know.  When I suggested we try this hike before she leaves for the Sierras, she jumped at the opportunity.  Marit knows long distance hiking, as she completed the entire Appalachian Trail in 2009.

The dog and I left the house at 6:45 AM and met Marit at a McDonalds near Waynesboro at 7:30.  We left her car and drove the remaining miles together.  Marit didn't think we needed to drop a water cache (and she was right), so we were on the trail just after 8:30.  We hiked the loop in a counterclockwise motion, starting at a parking lot at about 2:00 on the loop below - near a Girl Scout camp named Camp May Flather.  It isn't easy to find your way here (and even tougher to get out), thanks to a series of farm roads that all look alike. 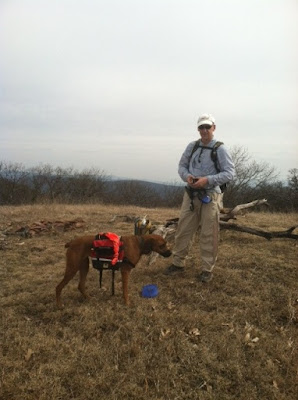 We grabbed trail maps the Forest Service provides at the trailhead, and began our climb up to Little Bald Knob.  We started at 1689 feet elevation, but were soon climbing steeply, passing the Grooms Ridge Trail (which makes a nice, and much shorter loop hike) before the trail leveled out.  After almost a mile of fairly level hiking, we climbed again, reaching Little Bald Knob, the high point on our hike at 4,351 feet. We didn't get up there until 11:30, which was a little disconcerting (3 hours to go the first 7 miles is not a good sign when you are shooting for 25 miles in a day), but we stopped to eat lunch anyway.  Marit took the photo next from here, though it doesn't do justice to the view we had from the top of Little Bald Knob.
We then headed down the mountain at a steep rate, shown on the elevation profile below between 8 and 10 miles.  Along the way, it occurred to me that there was a geocache on this part of the trail.  I looked at my GPS and discovered we were 17 feet from the cache.  Unfortunately, we found the cache in several pieces. 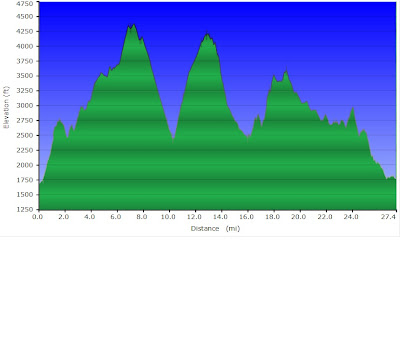 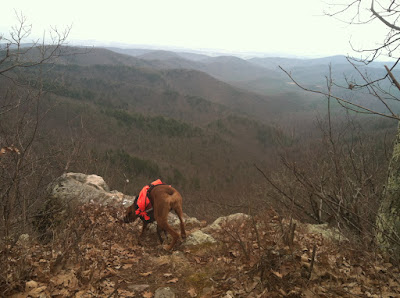 We stopped again, this time to enjoy the view of mountains to the north, which seemed to go on forever.  The trail was in really good shape through this section, with new saw cuts evident on trees next to the trail.

At the bottom of the mountain, 10 miles into our hike, we had the only stream crossing on the hike.  It was a little dicey, especially since the dog didn't want to cross, but we all made it over the stream, crossed FDR 95, and headed right back up the mountain.


Another steep climb took us to the edge of Ramsey's Draft Wilderness Area, and we hiked a section of trail the two of us had hiked back in 2010.  This section took us over Big Bald Knob, which ironically isn't as high as Little Bald Knob had been several miles earlier.  Then it was back down Dividing Ridge, steeply. 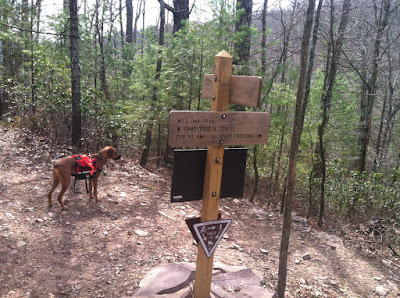 As we made our way to FDR 96, I felt great that, even though we still had over 10 miles left on the trail and it was nearly 4:30, we seemed in good shape.  There were still 3 hours of daylight left to do 10 miles.  We could do it if we moved fast.  Especially since the next mountain (Hankey Mountain) involved a climb that I remembered to be easier than the other climbs on this hike.

I remembered wrong.Hankey Mountain was a tough slog.  Maybe it is because we were already 0ver 15 miles into our hike.  Whatever the reason, it was a hard climb that seemed to go on forever.  The trail peaked 2.3 miles later on Hankey Mountain, at 3,407 feet, nearly 1,000 feet above FDR 96.

And then the trail kept going forever.  Until after the sun went down.  Venus and Jupiter came out.  Mars glowed red over near the Big Dipper.  Harrisonburg glowed brightly in the distance.  And we followed our headlamps slowly down the mountain, using my GPS to make sure we were staying on the trail.  (I love using map and compass, but the GPS was sure handy once it got dark out.)

We finally reached the car again at 9:30.  We hiked 27.4 miles according to the GPS, possibly higher than the published length of 25.6 miles due to going off trail to have lunch and retraced our steps when Marit lost part of her trekking pole.  I didn't get home until after 11, thanks to a few circular miles on the farm roads east of the mountains.

It is amazing to think that there is a trail running event every February that strives to run this trail four times in 24 hours.  I cannot imagine!  I now know that I can do a Grand Canyon rim to rim hike - which is on my lifetime list.