The weather guy in Charlottesville said that leaves in Highland County and west were at peak the weekend of October 15th, so it seemed like a good time to head further west than normal and test out some new equipment on an overnight backpacking trip.  It was just me and the dog, and it was the first overnight for the dog – so I was really testing her out, too.

I chose an area of Virginia that has been on my hiking bucket list for many years, Laurel Fork Primitive Area in the George Washington National Forest.  The drive took me a couple of hours, but I stopped along the way to look at the scenery, make a telephone call, and uncover a couple of geocaches.  There were lots of motorcycles out on the road, as the leaves were in the Autumnal glory.

I parked in a picnic area about a mile off of the main road to start the hike.  Three guys in a pickup truck pulled up as I was putting my boots on, and we talked for a while.  They were camping at a developed spot a few miles away, and came over to day hike the area.  I encouraged them to head out the trail straight east as it had quicker access to the main waterway, Laurel Run.  I headed down another path that took me south.

My path took me though some dark woods that were described as old growth forest (uncut) in one guidebook.  I don’t know if they qualify as old growth, as they appeared to be hemlock, and the old growth hemlock in Ramsey’s Draft had much larger trees.  But it was a dark and mysterious place – and those places are harder to find these days.

After about a half hour of hiking, I came to a trail intersection that didn’t appear to be marked on my map.  As I was standing by the sign, the three day hikers came walking down the other trail.  Turns out that my map was incorrect, and the trail not on my map looped back up to the parking lot.  They gave me a copy of the crude map provided by the Forest Service at the Picnic Area, a map I had originally chosen not to take.  I now notice that every other map I have found of this area correctly had the missing trail, including the guidebooks that I left home to save weight.

I headed further south, crossed the first of many streams, then ascended briefly but steeply to an old rail bed that hugged the side of a mountain and very gradually gained elevation.  This trail took me west to a parking lot/campsite and the beginning of the Slabcamp Run Trail.  Slabcamp Run is a three mile trail that passes through a wide variety of different areas, including a beautiful field, an old apple orchard, a pine forest, and mixed hardwoods.  It starts at about 3600 feet in elevation and slowly drops to about 2800 feet after three miles.

I am grateful to others who came before me and painted blue blazes on trees along this route.  Although it generally follows the streambed of Slabcamp Run for most of its distance, there were many times when a trail was imperceptible.  I pulled myself along, going from blaze to blaze over a leaf covered forest, not sure if I was on an actual trail.  For portions of the trail, I found myself on another old railroad bed, which made going easier.  But as the trail approached the main waterway in the area, Laurel Fork, the trail hopped the stream bed multiple times, and I relied on those blazes to keep me on route.

At Laurel Fork, the trail relies on rocks to cross this stream.  Due to several days of rain before my trip, however, the stream was too strong to try crossing.  There is a link below to some video that shows the strength of the stream.  At first, I tried to work my way off trail north to the next trail, but cliffs en route proved too difficult to overcome.  I backtracked to the spot where Slabcamp Run meets Laurel Fork, and camped in a small site in the mountain laurel for the night.

On this hike I was testing several new pieces of equipment, including some new style, lightweight hiking boots made in France.  I bought the Hoka One One hiking boots because I've been experiencing foot pain over the past year and I thought the cushioning would minimize pain on hikes.  Honestly, they are not very attractive boots.  I look like I am a 5'2" man trying to reach 5'5".  And I think they are wider than my feet should use.  But my feet feel better than they have in a long time wearing them, so I'll continue using them. 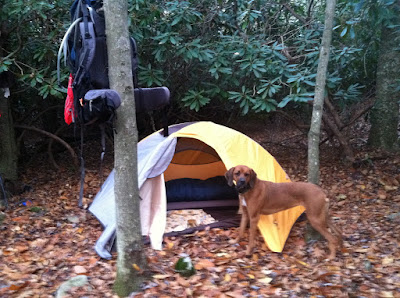 I was also trying out my new GPS after having lost my beloved Garmin GPSmap 60csx on a recent hike over an overgrown trail.  After much research, I replaced that GPS with the Garmin GPSmap 62s from REI.  The 62 is an upgraded version of the 60, with some really great additional capabilities as well as some frustrating features.  I'll address that in a separate posting sometime soon.

The GPS proved useful on the return hike on Sunday morning.  Passing through an area I had hiked the day before, it was difficult to tell where the trail headed.  I found myself walking through the woods without finding a trail to guide me.  I found my way back to the trail using the GPS route from the day before.  No amount of map and compass work can help when you know you are within a hundred hards or so of a trail but cannot find the right spot.  The GPS saved me several minutes of searching.
Laurel Fork is far enough from Charlottesville that an overnight is pretty much necessary.  There is a developed campground about 5 miles away, administered by the Monongahela National Forest, called the Island Campground.  I didn't check this out, though I know others who have camped there.  Overall, this was a surprisingly hard hike, despite the relatively gradual grades.  The stream crossings were always dicey - one slip and it would be hard to return to the car, and there was nobody else for a long way.  I was glad I followed proper procedure and left an expected hike itinerary back at the house!

I plan to return, maybe with some scouts, but plan to do so when it has been a little drier.  It will be interesting to compare the area at a different time of year.  I also put together a YouTube video of the trip using iMovie 11 (this program is also an upgrade with some very frustrating aspects - and the reason this blog posting took so long to put up).  Check it out for another view of the area.
Posted by Jeff M at 7:44 AM