I joined the PATC Vigorous Hikers Group for a second outing on September 21st.  There was very little overlap in attendance from the first group because many of the folks hiking this week had just gotten back from hiking California's John Muir trail when I joined them the first time.

We met at the trailhead, which was off of Rt. 649 (Chapman Mountain Road), a road I had never taken before.  The PATC map made it look pretty sketchy, but it turned out to be in great shape.  It splits off of the road to Graves Mountain Lodge near Criglersville and would eventually pass Hoover Camp and ascend to Big Meadows Campground if Shenandoah National Park permitted traffic that far.

We started out at 8:50 AM, heading north on the Chapman Mountain Horse Trail.  I believe that this trail is primarily used by guided groups from Graves Mountain Lodge, because it is not marked well.  This was not a problem for the first half of the hike, as the trail was clear.  But we traveled through a gate onto pasture land, and cattle trails crisscrossed the land, which was on the edge of fields and woods.

At one point we were in some woods and the trail ended, with cow bones strewn all over the ground.  And when you are on a cow trail and the only cows appear to be long dead, it is time to look for a new trail!  We eventually made our way north to the W Trail (not shown on the map), and then to the Doubletop Mountain Trail.

The Doubletop Mountain trail is not for the faint of heart!  For the first half of the ascent, it climbs at a 29% grade over a little over a half mile.  The entire ascent lasts 2 miles and averages over 975 feet of elevation gained per mile.  And these guys could move.  The trail was quite overgrown in spots, particularly on the top of the ridge.  Several times I looked down at my feet only to be able to see nobody when I looked back up.  I was glad I had done this hike before. 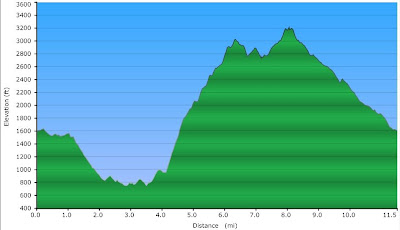 At the top we stopped for lunch very near a spot where I had hiked back in April.  Right at the intersection of the Wilhite Wagon Trail and the Doubletop Trail was a large rocky area where we could sit and have lunch.

The group lunched for over a half hour while it deliberated about the rest of the hike.  Some of the group was very anxious to explore the Staunton River Trail, and nobody seemed jazzed to check out Monkeyhead.  I wanted to go as far as the summit of Doubletop so I could retrieve a geocache I left when I'd hiked some of this trail in April.  So the rest of the group went west on the Doubletop Trail to the western section of the Wilhite Wagon Trail (which a website says is misspelled on the map), then off of Doubletop to find the Staunton River Trail.  I stayed on Doubletop, retrieved my geocache (looking good, though it had fallen out of the tree).  I felt like I was Apollo 12, which retrieved part of an unmanned Surveyor spacecraft from the surface of the moon.  I doubt anyone had been near my geocache since it had been placed 5 months earlier. 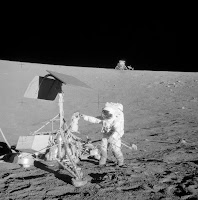 Heading back to the car, I decided to take the Wilhite Wagon Trail's eastern section.  The map says that it is not maintained, but one of my fellow hikers told me that he had taken the trail in the Spring, and it was definitely in good shape.  The trip down the Wilhite Wagon Trail from the Doubletop Mountain Trail back to the Chapman Mountain Horse Trail took about an hour, and it was a delightful trail.  I believe the map says that the trail is not maintained because it is one of the few trails in Shenandoah National Park that the PATC does not maintain.   But though it needed some work and one section was tricky to follow, the trail is in good shape.  It was originally a road that was closed when Herbert Hoover bought his camp on the Rapidan River in 1929.  It is wonderfully constructed, with rock walls securing the downhill portion of the trail along large portions of its existence.  And it drops at a consistent 8% grade, as shown on the right side of the elevation profile above.  It had only one difficult section to follow, but after I figured out that the trail was marked via pink ribbons on the trees, had no problem negotiating it.  I would recommend this trail wholeheartedly, except during hunting season as it ascends into the Rapidan Wildlife Management Area.  It is also somewhat difficult to find at the bottom of the trail, so I have listed GPS coordinates at the end of this report.  It looks like an old road here, but there is no trail sign.

Upon returning to the parking area, I found 2 of my fellow hikers had taken off in their cars, and the carpool van had another hiker waiting for the Staunton River hikers.  Mike told me he had twisted his ankle, but reported that the section of the Wilhite Wagon Trail I did not take was also in great condition.  Using the Hoover Camp Road, this makes a nice little loop hike that I am going to have to recommend to the PATC Charlottesville Chapter.


Epilogue
In an attempt to get a hike in before mid-week rains, I joined a couple of other hikers for a loop hike here a week after this description.  We did the Wilhite Loop, which is described below.  Highly recommended during non-hunting season!  It starts from the parking lot described above.


Directions:  Take 29 north through Madison, then turn off on Rt. 231 towards Sperryville.  Turn left in Banco at the sign for White Oak Canyon.  Just after Criglersville and the Stonewall Jackson historic marker, turn left onto Rt. 649 and an immediate right.  Follow Rt 649 past the End State Maintenance sign and up a couple of hairpins, to a parking area right at the SNP boundary.  (You also can drive further, to the WMA boundary where there is a kiosk, and start and end the hike with a walk on the Rapidan Road.).  The road, though not paved, is in great shape.


Start the hike by taking the gated road to the right (North) for 5 minutes (1350 feet) to a road that comes in from the left.  There is an SNP boundary sign on a tree here, and it is the first road or trail entering from the left.  This is the Wilhite Wagon Trail.  Follow this road another 5 minutes to a slight fork, and stay left, where it becomes a trail.  The trail rises to an overlook just below the intersection with the Doubletop Trail (not obvious unless you are looking for it, but it is only about 20 feet before the intersection), where we stopped for lunch.  This section is 2.2 miles long and took us 1:08.  We stopped for lunch, then then followed the Doubletop Trail for a little over 10 minutes (2200 feet) then cut left on the other part of the Wilhilte Wagon Trail (1.4 miles, 38 minutes) to the Rapidan Road.  All sections of trail were in good shape and easy to follow.  The Rapidan Road is used to return to the car. The road was 3.1 miles long and took us 1:12, including a stop to look at the RWMA kiosk at the boundary between SNP and the RWMA.  Though this is a road, we did not see a single vehicle (other than a parked one) the entire route.  There are a number of established campsites along the side of the road, with fire pits.